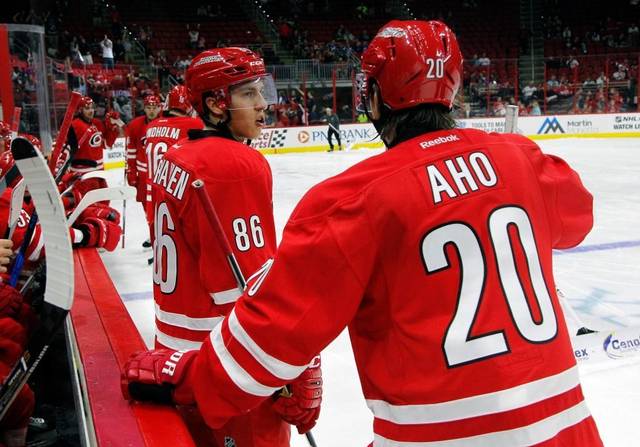 The Finnish winger Sebastian Aho was selected by the Carolina Hurricanes in the 2015 draft in the 2nd round as the 35th overall pick. Aho began playing with Carolina since the start of the 2016-2017 season, and has appeared in all 39 of the team’s games. Carolina has faced many player changes since their last cup win in the 2005-2006 season as former Captain Eric Staal was traded at the deadline last season to the New York Rangers. The Franchise is in need of key players for it to be a contender in the playoffs which they haven’t done since 2008-2009 a seven-season drought. The upside is that it looks like the Hurricanes have drafted a very talented player and have seen a glimpse of his potential in the NHL.

Aho started his NHL career on the right foot obtaining his first career NHL assist and point in his very first game with Carolina against the Jets on October 13th and would continue his point streak as he got another assist the next game against Vancouver. The rookie wouldn’t be able to find the back of the net through the first month of the season but it all changed against the Washington Capitals on November 12th. Aho would receive the puck near the boards, he’d pass it to Teuvo Teravainen, who’d pass it to Jordan Stall, Stall would then shot a wrister, Philipp Grubauer stopped the shot but left a huge rebound and Aho anticipated the goalie to put the puck in the net for his first career NHL goal. A very well executed offensive play. But Aho’s night wasn’t done he’d assist Teravainen’s goal later in the game. The Staal, Teravainen, and Aho line would also connect for the game’s last goal which has Sebastian’s second goal of the game, an empty-netter in the third period. Aho had his best career NHL game with 2 goals and 1 assist all with his parent’s in attendance. The line combination has helped the team generate goals and even helped win games. Currently, Sebastian Aho has 8 goals and 13 assists for 21 points. Aho has also found himself on the powerplay in which he has gotten four assists. Another role Aho has due to his skill is a designated shooter in the shootout which he has been able to perform well in.

For Aho, it is possible to predict a 40 point rookie season. Right now he has 21 points in 37 games which is about the halfway point of the season. With his linemates Staal and Teravainen as well as power play time Aho can achieve 15 goals and 25 assists for 40 points when the season is said and done. However, it would not be a surprise if he has somewhere around 30 assists and only 10 goals because Staal and Teravainen are both good offensively and can score. Sebastian’s average ice time is 14:12 a game which is a little low if he played around 16-17 minutes there could be a difference in his stats but right now he’s shown to utilize his ice time correctly and found ways to get on the score sheet. Bill Peters may give him extra shifts, but that is for Peters to evaluate and decide on. But time will tell about Aho’s ice time as the season progresses. Aho currently sits at the 7th place of rookie point leaders which is considerably high knowing that he wasn’t the player who had the spotlight on him prior to entering the league like Patrik Laine and Auston Matthews did. Aho may not be the rookie of the year but is sure to be creating more highlights, as well as league wide recognition for his skill and hard work for the Carolina Hurricanes.

Want to be an Editor or Writer? Join The Puck Network!

Carolina Caniacs is part of The Puck Network, which covers the entire NHL. There are openings to cover your favorite team(s) and earn school credits! If you are interested, then apply by filling out the form here: Join Our Team